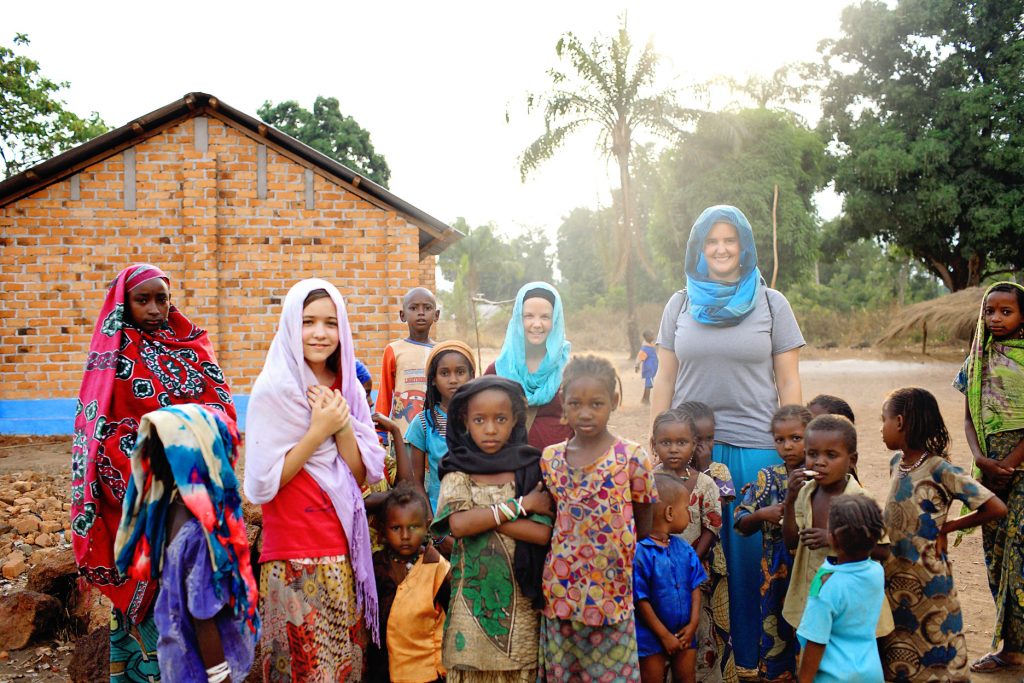 During a Wednesday evening prayer service, she prayed for workers for the harvest, and sensed God asking, “Why not you?

As a child, Crystal Echols, standing at right in the photo, dreamed of jungles and lumbering elephants, the African landscape stirring to life in the missionary stories her mom read during homeschool. Mrs. Echols raised Crystal and her siblings with an emphasis on global mission, praying they might one day serve the Lord overseas. Over the years, though, Crystal grew not just older but more pragmatic, and those first wild inklings gave way to the sensibility of a sturdy job and financial security.

Still, she never stopped praying for missionaries. As a full-fledged adult, she often asked God to send out laborers, especially to Africa. Then in a Wednesday prayer meeting, as she pleaded with God about fields ripe for harvest, she felt Him distinctly speak to her. “Well,” He said, “why don’t you go?”

“I couldn’t give an answer to that,” Crystal says. That was the moment God pulled her back to those sharp childhood yearnings, and she began to pursue life as a missionary.

Crystal arrived on the continent of Africa in January of 2017. She’d planned to serve for several years with a team in Zemio, a sleepy town in the Central African Republic. By April, however, security in the country had stuttered to a halt, and the team was forced to evacuate.

This is how, Crystal explains, she wound up in Torit, South Sudan, where she currently serves in administrative and discipleship roles. In her office work, she keeps the remote teams in her unit humming along. She navigates coiling immigration labyrinths, tracks finances and paperwork, and arranges the air transport of groceries for families bereft of a local market.

South Sudan, too, is known for its volatility, and if a team must evacuate, Crystal is the person choreographing phone calls, vehicles, and emergency housing. Having recently weathered this experience herself, she understands both the urgency and the calm required to pull off an evacuation. It’s funny, she remarks, though not at all surprising, how God tools us perfectly for the work ahead.

In her discipleship role, Crystal works with young women in Torit, mentoring them and gently imparting a passion for the many unreached peoples of South Sudan. Every interaction with these ladies is tinged with her hope that the African church will soon helm the movement to bring the gospel to these hidden tribes and places.

In Torit, where hot winds kick up sand, and tiny dik-diks prance through her back door for a visit, Crystal is far from her family but close to their hopes for her. Recalling her mom’s early influence toward mission work, she adds, “But then when I became a missionary, [my mom] decided that was really hard. So now she tells other homeschooling parents to just beware, God might actually answer your prayers…and then your kid is on the other side of the world.”

No matter what side of this earth Crystal inhabits, she rests in the certainty that God has placed her there for the beautiful purpose of making His glory known. And along the way, she has found the reality of missionary life just as vivid and surprising as she’d dreamed.

Feeling like you’re just an ordinary person?  Check out the places we have for “ordinary” people like you on our Serve page or sign up for our Explore More email series to learn more.